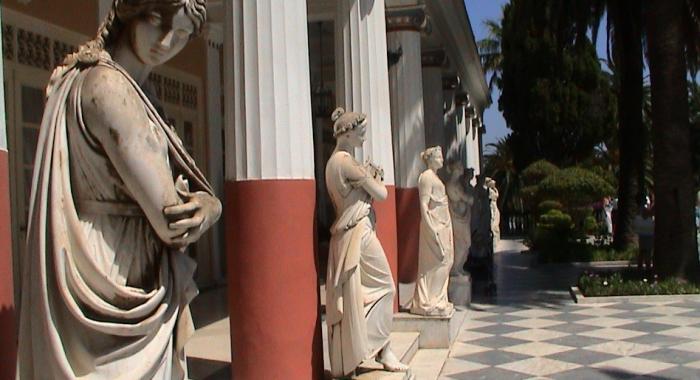 Achilleion Palace was built from 1888 to 1891. Italian architects Rafael Carito and Antonio Landi commissioned by Empress Elisabeth of Austria. The palace is located near the village of Gastouri.

Elizabeth (also known as CC) tried to find peace and rest in Corfu after the tragic death of her son Rudolf. At her request, decoration, murals, the style of the palace, as well as statues - exclusively on ancient Greek and mythological themes. Inside the palace, we can admire paintings by Italian and Austrian artists, but the most impressive is the painting "The Triumph of Achilles" by the artist Franz Matz. The painting depicts Achilles in a chariot dragging the murdered Hector against the backdrop of the walls of Troy.

The rooms contain personal belongings of Elizabeth and the German Kaiser Wilhelm, furniture, jewelry, etc. It also exhibits statues of characters from ancient Greek history and mythology, as well as portraits and ceramics.

At the entrance to the palace is a Catholic chapel, impressive in its beauty. The fresco under the dome of the chapel depicts Jesus Christ in the Praetirium, at the trial before Pontius Pilate (the Judgment of Christ). Under the dome is the icon of the Blessed Virgin, the work of the artist Franz Matz.

In the garden of the palace there is a unique court of muses with sculptures of the three graces, the god Apollo, nine muses bought by Elizabeth at Villa Borghese, as well as the famous cultural masterpiece, the sculpture "Dying Achilles" - the creation of the German sculptor E. Henter. And an impressive 11-meter-high copper sculpture “Achilles the Conqueror” by the sculptor Getz.

After the death of the Empress in 1898, the palace remained closed for nine years, until in 1908. it was bought by the German Emperor William II. The Kaiser made changes both inside the palace and outside it: two statues of Achilles were removed, a building called the "House of the Knights" was built. The Kaiser arranged gardens around the palace and erected a monument to Elizabeth. In 1914, the Kaiser was forced to leave for Germany. After the defeat of Germany in the First World War, the Achillion Palace passed into the possession of the Greek state.

During World War II, the palace housed a hospital and headquarters. After the Second World War, the palace was used for the needs of government services. In 1962 a casino opens on the second floor of the palace. Since 1990 The palace functions as a museum.

For the summer of 2022, the museum is closed to the public for reconstruction. Visitors are invited to visit only the gardens of the museum.